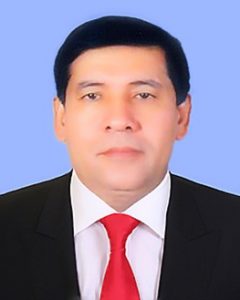 Daminov Akmal Akhundzhanovich was born in the Tashkent region on March 13, 1952. In 1975 he graduated from Tashkent State Medical Institute.

Work experience in higher education institution for 40 years, including teaching experience 40 children. The total duration of work without interruption is 40 years.

Since 1994, Candidate of Medical Sciences. In 1994 he defended his thesis on the topic: “Morpho-functional state of the liver under the action of indole” in the specialty 14.00.23. – Histology. Cytology. Embryology. Scientific leader: Professor Tashkhodzhaev P.I. He improved in the cities of Moscow, Kiev, Leningrad (St. Petersburg). Since 2006, the associate professor of the department.

Daminov AA is the author of more than 60 scientific articles and more than 20 instructional methodical tools. Daminov Akmal Akhundzhanovich on his theoretical lectures and practical exercises relies on new pedagogical technologies. He composed scenarios for conducting classes on the basis of new pedagogical technologies, and widely applies them in practice, A.A. Daminov is a leading specialist in its field (subject biology), therefore for many years he is constantly invited to host the city olympiad and republican olympiad in biology, and participates there as chairman or member of the commission on the subject.

For active participation in the Olympiad Daminova AA several times, to the rectorate of the Academy, personally the rector of the Academy was directed to blogging. Daminov AA takes an active part in public works of the department, faculty and academy. During the last 12 years he is the senior curator and chairman of the curatorial board of the medical faculty.